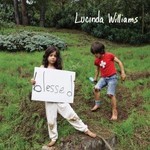 'Blessed' is the sound of wisdom and experience that three-time Grammy Award-winner, Lucinda Williams has gained through her years as an uncompromising talent.

Considered by many to be one of America's greatest living songwriters, three-time Grammy Award-winner Lucinda Williams lives up to that on 'Blessed' and more by delivering 12 songs that cover an even wider emotional spectrum than her previous work, without moving too far in any one direction.

It's nothing new to see Lucinda tug at the heartstrings and stimulate the mind with her songs, but there is a vibe throughout 'Blessed' that is unique to this album in particular. It's the sound of wisdom and experience that Lucinda has gained through her years as an uncompromising talent. Combine that with Grammy Award-winning producer Don Was at the helm, and something special is born. 'Blessed' was co-produced with Eric Liljestrand and Tom Overby, who co-produced Lucinda's highly praised 'Little Honey' (2008).

"Lucinda has stepped up to the plate and delivered an emotionally raw and lyrically beautiful album, making you feel truly "blessed" just listening to it. Featuring the 2011 Grammy Nominated "Kiss Like Your Kiss" (from the TV series 'True Blood'), 'Blessed' takes you on a journey through life and love, accompanied by beautifully played piano, soulful blues guitar, and vocals to die for."
-KELLY