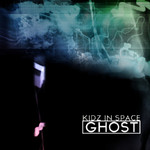 Featuring the moody "Lost in Space", the deadpan narration of "Number 1", punchy dance anthem "Downtime" and much more!

When we last caught up with the intrepid inter-galactic pop visionaries Kidz in Space it was some time ago. The trio of Josh Fountain, Ashley Hughes and Matt Neshat landed on earth in early 2009 after a chance encounter somewhere beyond the edge of this galaxy, and after discovery a mutual interest in hooks, lasers and digital drums they vowed to fuse their talents in music.

That fusion of talent resulted in the Top 20 hit "Downtime" which infiltrated the charts and the Nation's consciousness, and was quickly followed up by the "Lose My Cool" collection and the futuristic title track "Ghost" featuring the UK's Dan Black.

The album 'Ghost' marks vocalist and multi-instrumentalist Josh Fountain's outing as Producer, and showcases the groups progression - from the moody "Lost in Space" opener, to the deadpan narration of "Number 1", to punchy dance anthem "Downtime".