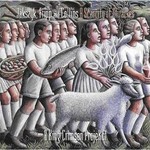 Jakszyk, Fripp & Collins With Levin and Harrison (A King Crimson ProjeKct)
A Scarcity of Miracles

When Jakko Jakszyk and Robert Fripp got together in February 2009 neither expected that their initial sessions of guitar-only improvisations would result in a full-blown album, or that it would ultimately be deemed to be "A King Crimson ProjeKct". As the material from those first sessions developed it was obviously becoming much wider in scope and scale. The arrival of sax player and former King Crimson-member, Mel Collins, added further colour and texture to the emerging songs. The line-up was completed with the addition of bassist Tony Levin and Porcupine Tree's drummer Gavin Harrison (both members of the 2008 incarnation of King Crimson) adding their parts to the material in their respective studios.

What had begun as an exchange of ideas, had now grown into a recording of heartfelt songs, an album that is immediately accessible on first hearing but reveals fresh detail and depth with each subsequent play, as one might expect from musicians of this calibre.

A Beginners' Guide to the ProjeKcts: The Deception of the Thrush

Died in the Wool (Manafon Variations)