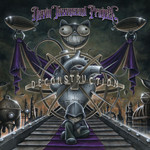 Featuring an impressive array of guests from Opeth, Between the Buried, Gojira, Cynic, Dillinger Escape Plan, GWAR, Meshuggah and the City of Prague Philharmonic Orchestra.

Devin Townsend is easily one of the most talked about front men in rock these days. Whether it's for his off-the-wall humour, his mesmerizing music or his heart-stopping stage show, the cult of personality that is Hevy Devy has been cata-pulted into the spotlight once again. Now, Devin Townsend Project completes the remarkable 4-album series that began a few years ago with 'Ki' and re-turned last year with 'Addicted' and now releasing the 3rd installment 'Deconstruction'.

Devin describes 'Deconstruction' as "brutal in a lot of parts, but pretty glorious in others. It rides the fence of negativity but ultimately ends supremely positive." It also features an impressive array of guests from Opeth - Mikael Akerfeldt, Emporer Ihsahn, Between the Buried and Me - Tommy Rogers, Gojira - Joe Duplantier, Cynic - Paul Masvidal, Dillinger Escape Plan - Greg Puciato, GWAR Oderus Urungus, Meshuggah - Fredrik Thordenal as well as also features the City of Prague Philharmonic Orchestra performing with Devin. Written, engineered and produced by Devin himself, 'Deconstruction' also benefits by having the iconic Jens Bogren (Opeth) handle mixing duties.