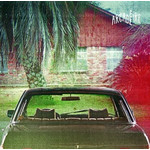 Limited edition vinyl issue of the 2011 Grammy Award Winning Album Of The Year!

Montreal's Arcade Fire successfully avoided the sophomore slump with 2007's apocalyptic Neon Bible. Heavier and more uncertain than their near perfect, darkly optimistic 2004 debut, the album aimed for the nosebleed section and left a red mess. Having already fled the cold comforts of suburbia on Funeral and suffered beneath the weight of the world on Neon Bible, it seems fitting that a band once so consumed with spiritual and social middle-class fury, should find peace "under the overpass in the parking lot."

If nostalgia is just pain recalled, repaired, and resold, then The Suburbs is its sales manual. Inspired by brothers Win and William Butler's suburban Houston, TX upbringing, the 16-track record plays out like a long lost summer weekend, with the jaunty but melancholy Kinks/Bowie-esque title cut serving as its bookends. Meticulously paced and conservatively grand, fans looking for the instant gratification of past anthems like "Wake Up" or "Intervention" will find themselves reluctantly defending The Suburbs upon first listen, but anyone who remembers excitedly jumping into a friend's car on a sleepy Friday night armed with heartache, hope, and no agenda knows that patience is key.

Multiple spins reveal a work that's as triumphant and soul-slamming as it is sentimental and mature. At its most spirited, like on "Empty Room," "Rococo," "City with No Children," "Half Light II (No Celebration)," "We Used to Wait," and the glorious Régine Chassagne-led "Sprawl II (Mountains Beyond Mountains)," the latter of which threatens to break into Blondie's "Heart of Glass" at any moment, Arcade Fire makes the suburbs feel positively electric. Quieter moments reveal a changing of the guard, as Win trades in the Springsteen-isms of Neon Bible for Neil Young on "Wasted Hours," and the ornate rage of Funeral for the simplicity of a line like "Let's go for a drive and see the town tonight/There's nothing do, but I don't mind when I'm with you," from album highlight "Suburban War."

The Suburbs feels like Richard Linklater's Dazed & Confused for the Y generation. It's serious without being preachy, cynical without dissolving into apathy, and whimsical enough to keep both sentiments in line, and of all of their records, it may be the one that ages so well.
4 / 5 All Music Guide.