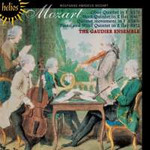 Mozart's contribution to the repertoire of music with wind instruments is of considerable significance. Not only did he write concertos for flute, oboe, clarinet, bassoon and horn, but he also made frequent use of these instruments in his chamber music. His interest in varied textures and colours led to unusual, sometimes unique, combinations of wind or wind and strings, and many of these works have become cornerstones of the repertoire.

This historically significant recording includes a single movement from a quintet never completed by Mozart before his death. It was one of only a handful of works singled out for by his wife Constanze for particular attention, whilst documenting his other fragments. The Horn Quintet was written for Joseph Leutgeb, a long-standing friend for whom Mozart also composed the four horn concertos, and shows an obvious affection for the instrument and its practitioner.

The Quartet, K370, contains a particularly lovely Adagio, only 37 bars long, but deeply expressive, and the final work here, K452 was considered by the composer himself to be the best work he had produced.

These important works could not be in more talented hands than those of The Gaudier Ensemble, who effervesce outstanding playing throughout in performances that Mozart himself would surely have been proud of. A recording to be relished with the CD player firmly on 'continuous play'!