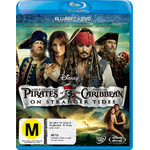 Pirates of the Caribbean 4 - On Stranger Tides (Blu-ray + DVD)

From Disney and Producer Jerry Bruckheimer comes all the fun, epic adventure and humor that ignited the original. Johnny Depp returns as Captain Jack Sparrow in a tale of truth, betrayal, youth, demise - and mermaids! When Jack crosses paths with a woman from his past (Penelope Cruz), he's not sure if it's love, or if she's a ruthless con artist using him to find the fabled Fountain of Youth. Forced aboard the ship of the most feared pirate ever, Jack doesn't know who to fear more - Blackbeard (Ian McShane) or the woman from his past. Directed by Rob Marshall, it's filled with eye-popping battle scenes, mystery and all-out wit.