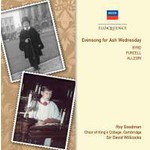 Roy Goodman's recording of the Allegri Miserere (in David Willcocks's edition, sung in English) was its first, made in March 1963. Although reissued countless times, the complete Argo recording from which it emanates - Evensong for Ash Wednesday - has never before been released complete. Consisting of hymns, psalms and readings, this is a regular event in the King's College calendar. Roy Goodman - now a famous conductor, then a gifted treble - sang with the choir at the time and in the booklet note provides delightful reminiscences of his time with the choir and working with Sir David Willcocks. He recounts how the boy treble chosen to sing the solo part in the Allegri was appointed on the spot, as it were, and how he charged into the chapel after a game of rugby and was selected to record the treble solo. Goodman has also provided photographs of himself from that time for the cover and booklet of this release.

"The second half … is devoted to Allegri's Miserere (Psalm 51, which in the Anglican rite is said in the Commination Service, between Matins and Holy Communion) … It is the piece which was jealously guarded by the Papal choir until Mozart created a sensation by writing it out from memory at the age of 14. The sensational thing about it nowadays is a recurring phrase descending from C to G above the treble stave, which the boys (or a solo boy?) bring off with the utmost aplomb. Fabulous is the only word for it." (Gramophone)

Farrant, R:
Hide not thou thy face