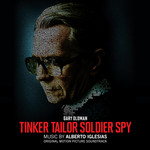 The film features the cream of British acting talent including Gary Oldman, Colin Firth and Tom Hardy, Oldman taking some persuading to step into the shoes of his hero, Alec Guinness.

Alberto Iglesias composed the score to the film; he has also been nominated for an Academy Award for his work in the film "The Constant Gardener" (2005) and again for his work in "The Kite Runner" (2007).

Tomas Alfredson's meaty distillation of John le Carré's novel is superbly accentuated by Alberto Iglesias' elegiac, string-driven score. The jazz-inflected motif for George Smiley is infused with melancholic trumpet and understated piano, while Karla possesses an ebb and flow of harp, and Jim Prideaux a mournful display of violins. Iglesias plies an effective strain of muted romance in Tarr and Irina with its measured piano and violins, while the title track is a gripping soundscape of isolation and paranoia, in true le Carré fashion.
- Empire Magazine *****

Having previously scored The Constant Gardener, Almodovar favourite Iglesias has no trouble evoking John le Carre's world again with a jazz-infected soundtrack steeped in mournful horns and strings, with a murky atmosphere. Muted and enigmatic, the 19 cues conjure stealth and unease, only occasionally straying into conventional thriller territory. When they do, though - as in the tense 'Esterhase' - you can see Gary Oldman's hunter circling his quarry.
Total Film - ****