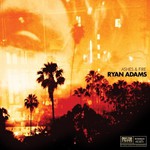 The most cohesive and luscious album of Ryan's distinguished, critically-acclaimed career - with guests Norah Jones and organist Benmont Tench of Tom Petty and The Heartbreakers.

Ryan Adams presents 'Ashes & Fire' - his first solo album to be released on his own PAX-AM label and Sony's Columbia Records. The album was recorded in LA at Sunset Sound in Hollywood and produced by Glyn Johns, renowned for his work with the likes of The Beatles, Bob Dylan, The Clash, The Who and The Rolling Stones, and whose son Ethan produced previous Ryan Adams albums 'Heartbreaker,' 'Gold' and '29'.

'Ashes & Fire' also features Tom Petty And The Heartbreakers' organist Benmont Tench as well as Norah Jones who sings backing vocals on several tracks, including the lilting, acoustic overtures of "Come Home", the sumptuous ballad "Save Me" and the heartfelt "Kindness".

From the country-rock tinged opener of "Dirty Rain", to the piano-led lament of "I Love You But I Don't Know What To Say" and the acoustic harmony of "Lucky Now", 'Ashes & Fire' is the most cohesive and luscious album of Ryan's distinguished, critically-acclaimed career.

Mike Smith, Managing Director of Columbia Records, said: "Ever since I heard 'Dancing With The Woman At The Bar' I have been in thrall to Ryan Adams. Here was an artist who you could follow to the ends of the earth and yet be continually surprised by. His solo career has generated so many joyous moments and stone cold classic albums. When I joined Columbia Records back in 2006 I had this vision of being able to attract the kind of classic singer-songwriters to the label that had been such a vital part of the label's history. Ryan to me is in the lineage of the very greatest artists that have worked with Columbia and I am thrilled to be releasing what is undeniably his finest album in ten years."

Ryan Adams is a multiple-Grammy-nominated singer songwriter from Jacksonville, NC whose critically acclaimed and commercially successful albums both as a solo artist and with the Cardinals have included 'Heartbreaker' (2000), 'Gold' (2001), 'Love Is Hell' (2004), 'Cold Roses' (2005) and 'Easy Tiger' (2007). Adams is also the CEO of his own PAX-AM label through which he has released numerous singles and last year's Cardinals III/IV double album, among others. He is also an accomplished author, with two books - 'Infinity Blues' and 'Hello Sunshine' - released by independent publisher Akashic.