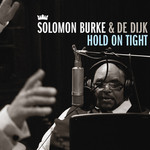 On October 10, 2010, Solomon Burke passed away at Amsterdam Schiphol airport on his way to perform a gig with his Dutch collaborators De Dijk. What was supposed to be a release party for their album Hold On Tight then became a celebration of the life of the one true King of Rock 'n Soul.

De Dijk, heroes of the Dutch music scene, and Solomon met and shared the stage while on tour in 2007, and they came up with the idea to record an album together. King Solomon was true to his word; De Dijk adapted a number of songs from their back catalogue for Solomon to sing, and they dove into the studio for what sadly turned out to be Solomon's last album.

De Dijk's bluesy spin on soulful hard rock turned out to be a sweet musical match with Burke's powerful vocals, Hold On Tight is one of the truest Rock & Roll projects he worked on. As allmusic.com puts it: 'an impressive finale to a genuinely remarkable career'. The album features a contribution of Jools Holland on piano on "What A Woman".