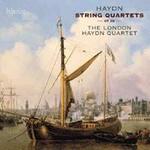 "their performances often seem strikingly austere, and will not be to all tastes; they sometimes have a rawness that harks back to the early hair-shirt days of the period-instrument movement" (The Guardian)

"this recording maintains their historically informed, period instrument approach. Once again, preparation has been meticulous...The almost vibrato-less playing is immaculate in intonation and subtly responsive to shifts and contrasts of Haydn's invention." (BBC Music)