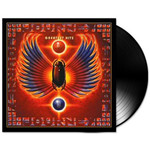 Journey, the American Hard Rock band that was formed in 1973 and became a sensation in the early '80s, didn't fully break through until their 1982 hit "Don't Stop Believin".
Greatest Hits is a compliation album by the American rock band Journey, originally released in 1988 by Columbia Records. It is the band's best-selling career disc, spending 554 weeks on the Billboard 200 album chart. Additionally, as of late 2014, it has logged nearly 1,000 weeks on Billboard's Catalogue albums chart.
It continues to be one of the most popular 'best of' packages.