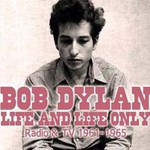 This 80-minute collection represents Dylan at his most fertile via radio and television broadcasts made throughout this astonishing era.

While Bob Dylan's career has proven fascinating to track at virtually every juncture, few could seriously argue that the period between his arrival in New York City in 1961 and his first forays into electrification on 1965's 'Bringing It All Back Home' - the era when Dylan developed at a rate unparalleled by any other artist in the rock age - remains the most scintillating, satisfying and dynamic of all.

This 80-minute collection represents Dylan at his most fertile via radio and television broadcasts made throughout this astonishing era.

The collection features songs and interviews from the 1961 folk Hootenanny at the Riverside Church, New York, just six months after Bob's arrival in NYC and before he had even signed a record deal. His appearance on Oscar Brand's Folk Song Festival broadcast in October 1961, aired on WNYC radio, is then featured, followed by a second Oscar Brand radio show broadcast on WNBC in the spring of 1963. Two television appearances from The Steve Allen Show in February 1964 and the Les Crane Show in February 1965 - barely a month before the release of 'Bringing It All Back Home' - complete this superb set.