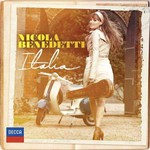 Crafted in Edinburgh, the album celebrates Nicola's Scottish-Italian heritage as she plays virtuoso Italian masterpieces, accompanied by the leading chamber orchestra of her native country.

The album highlights baroque favourites including "Summer" from Vivaldi's 'Four Seasons' and Tartini's famous "Devil's Trill" sonata, for which Nicola is joined by a hand-picked chamber ensemble. The selection ranges from the virtuosity of the opening Vivaldi Concerto "Grosso Mogul", to the lament of the "Veracini Largo" and the beauty of the two arrangements of Vivaldi vocal works, including the haunting "Nulla in Mundo Pax Sincera".

Nicola was the first ever Scot to win the BBC's 'Young Musician of the Year' in 2004. Since then she has established a top-level international career, appearing with leading orchestras across Europe, North America and Japan.

"This is the best recording of Vivaldi's 'Summer' I've heard...at precisely 2.19 Benedetti performs a trill in which she only partially depresses the string, allowing a rainbow of stratospheric harmonics to colour the trill...Great recordings are made of tiny moments of unexpected brilliance like this" (ClassicFM)

"With a Baroque-type bow, using very little vibrato (but with modern strings), she produces a sound that, for the most part, is cool and clear but by no means inexpressive. The SCO match her elegant phrasing and provide an accompaniment that's alert, spirited and sensitive. It conveys a brightly polished image of the music, most enjoyable, and bringing a virtuoso aspect to the fore." (Gramophone)

Serenity: The Beauty of Arvo Part