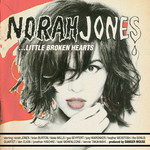 Jones drew the inspiration for the album cover from the vintage movie posters that adorn Burton's Los Angeles studio. "Brian has this great collection of Russ Meyer posters in his studio," explains Jones, "and this particular one, called Mudhoney, was right over the couch where I sat every day. I always was looking at it and thinking 'that's so cool I want to look like her!' I remember staring at the poster the whole time we made the record. It's a great visual."

'Little Broken Hearts' is the fascinating next step in the artistic evolution of one of the music world's most consistently intriguing singer-songwriters. Jones first emerged on the world stage 10 years ago this month with the February 2002 release of 'Come Away With Me', her self-described "moody little record" that introduced a singular new voice and grew into a global phenomenon, sweeping the 2003 Grammy Awards and signaling a paradigm shift away from the prevailing synthetic pop music of the time. 'Come Away With Me' has just become the #10 best-selling album of the Soundscan era. The album has sold 25 million copies worldwide.

Since then, Jones has released three more critically acclaimed and commercially successful solo albums - 'Feels Like Home' (2004), 'Not Too Late' (2007), and 'The Fall' (2009) - as well as two albums with her country collective The Little Willies. The 2010 compilation 'Featuring Norah Jones' showed her to possess an incredibly versatile voice by collecting her collaborations with artists as diverse as Willie Nelson, Outkast, Herbie Hancock, and Foo Fighters. Jones previously collaborated with Danger Mouse on his acclaimed 2011 album 'Rome', a valentine to classic Italian film score music that also featured Jack White.