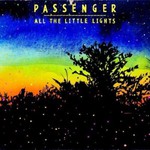 Passenger
All the Little Lights

All the Little Lights, the third long-player from Mike Rosenberg, better known as the founder, vocalist, songwriter, and driving force behind English folk-rock outfit Passenger, continues in the vein of 2010's Flight of the Crow, offering up another evocative collection of heartfelt, largely acoustic, indie folk gems that invoke names like Coldplay, Van Morrison, Villagers, Mumford & Sons, and even Neil Young. Recorded once again in Australia, All the Little Lights represents an evolution in both Rosenberg's songwriting and his overall sound, maintaining the emotional intimacy of his previous outings while introducing a bigger and bolder production style. - AllMusic