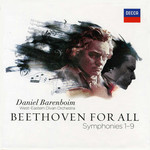 Decca's five-disc set, from Daniel Barenboim, of the most revolutionary and influential symphony cycle ever composed was recorded with the West-Eastern Divan Orchestra in Cologne during August 2011.

"The lean, tight, firecracker approach to Beethoven, currently fashionable, is not Barenboim's way. An old romantic at heart, he refuses to give crisp definition even to the motto rhythms launching No 5...Once Beethoven's kaleidoscope turns gently lyrical, conductor and musicians are more persuasive. The lighter the symphony in gesture and texture, the better the performances become." (The Times)

Decca's five-disc set, from Daniel Barenboim, of the most revolutionary and influential symphony cycle ever composed was recorded with the West-Eastern Divan Orchestra in Cologne during August 2011.

Asking himself why the world needs another recording of the Beethoven symphonies, Barenboim (who has himself already recorded the cycle once before, with the Staatskapelle Berlin, in 1999) replies: "I think the Beethoven symphonies with the Divan orchestra is different. There is a terrific amount of energy, because of the youth of the players, but there is just as much rigour. And the combination of rigour with energy is very powerful. If people get one tenth of the satisfaction that we had when we played this music by listening to it, then I will be happy."

Beethoven For All: The Piano Concertos [3 CD set]
more suggestions…