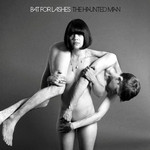 Bat For Lashes
The Haunted Man

Bat for Lashes first captured hearts back in 2006 with a set of distinctively haunting and rich songs ripe with magic realism. Her dream world was opened up in two Mercury Music Prize nominated albums, 'Fur and Gold' and 2009's 'Two Suns'. The latter featured the irresistible 'Daniel' - which won Ms Khan an Ivor Novello award for Best Contemporary Song - and began her journey into the mainstream.

The striking album artwork for 'The Haunted Man' was shot by the revered photographer Ryan McGinley, known for his naturalistic imagery (Sigur Ros album artwork).