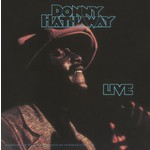 Donny Hathaway had one of the strongest voices in Soul, both in mere vocal prowess and in his lyrical abilities. "The Ghetto", one of his most beloved songs, is on par with Marvin Gaye's "What's Going On" (incidentally also a famous cover by Hathaway, as featured on this Live album) or Curtis Mayfield's "Move On Up". Also featuring a heartrending version of "Little Ghetto Boy".

Side B
1. Little Ghetto Boy
2. We're Still Friends
3. Jealous Guy
4. Voices Inside (Everything Is Everything)