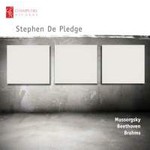 SPECIAL PRICE FOR A LIMITED TIME

"[de Pledge] brings to this CD his trademark transparency of touch. The sound is bright and firm as he beings the first promenade, and 'Gnomus' emerges with expansive breadth" (BBC Music)

"[de Pledge] brings to this CD his trademark transparency of touch. The sound is bright and firm as he beings the first promenade, and 'Gnomus' emerges with expansive breadth...And so it goes, each episode vividly characterised...The Brahms Rhapsodies which round off this impressive CD are a delight: the first is exquisitely nuanced, the second unleashes a mighty performance."
(BBC Music)

New Zealand pianist Stephen De Pledge is one of the most exciting and versatile musicians of his generation. Stephen's solo performances have taken him throughout the UK, including five solo recitals in the Wigmore Hall in London, where he made his acclaimed debut in 1999. He has also given solo performances in Hong Kong, Italy, France, Singapore, Japan, Australia and the USA.

Stephen's repertoire is far-reaching, from the music of the 17th to the 21st centuries. He has always been an advocate for contemporary music, and has given the world premiere performances of many works.

Stephen has recorded previously for Champs Hill on a CD of chamber works by Messiaen, studying with Mme. Messiaen in Paris prior to the recordings of these works.