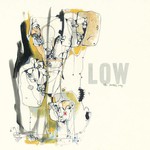 It's an old-school Low burner, quiet and placid and beautiful until the moment when you realize that it's become a stormy, powerful thing. The core of any Low album, though, is the unearthly beauty of Sparhawk and his wife Mimi Parker's vocal harmonies, which, after 20 years, have lost none of their emotion-stirring power.

Tweedy adds a few more instruments that Low would've done themselves back in the day, but the song still feels like it could've come straight from Secret Name.