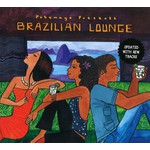 Brazilian Lounge will take the listener to the contemporary bars and lounges of Rio and Sao Paulo, where a new generation of musicians is reinvigorating the classic sounds of samba and bossa nova.

It is impossible to deny the influence that Brazil has on today's global culture. From music and film to fashion and dance, Brazil has become one of the world's most important resources of popular art and entertainment. In appreciation of this extraordinary culture, Putumayo presents Brazilian Lounge, a collection featuring the sultry voices and urban grooves of many of Brazil's finest contemporary musicians.

The fusions of samba, soul and funk by alternative Brazilian musician and producer BiD, combined with the vocals of international music and film star Seu Jorge, make "E Depois" one of the stand-out tracks on the collection. Seu Jorge is best known for his gripping role as Knockout Ned in the film City of God.