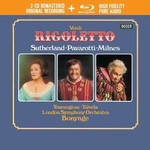 "May I say straight away that quite apart from the splendid contributions of Sutherland and Milnes, Pavarotti's Duke has a special flair with free and characterful vocalising which is one of the great strengths of the set…On his very first entry in the opening scene, even before 'Questa o quella', there is a hint of a chuckle in Pavarotti's voice that is something of a Gigli quality. Here is an unmistakable rogue but an unmistakable charmer, too. At once the character is believable, which indeed says much in this opera." Gramophone

Each edition includes libretto, and synopsis both with English, German and French translations, original essay, and rare images.

"[Pavarotti] is an intensely characterful Duke: an unmistakable rogue but a charmer, too...[Sutherland] is glowingly beautiful as well as supremely assured technically. Milnes makes a strong Rigoletto, vocally masterful rather than strongly characterised." Penguin Guide