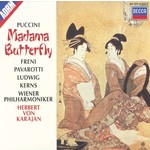 "he inspires singers and orchestra to a radiant performance which brings out all the beauty and intensity in Puccini's score, sweet but not sentimental, powerfully dramatic but not vulgar. Freni is an enchanting Butterfly, constantly growing in stature...Pavarotti is an intensely imaginative Pinkerton" Penguin Guide

"In every way except one the transfer of Karajan's radiant Vienna recording for Decca could hardly provide a firmer recommendation. The reservation is one of price - this Karajan is on three discs, not two, at full price. However it does allow each act to be self-contained on a single disc, and for such a performance as this no extravagance is too much. Movingly dramatic as Renata Scotto is on the Barbirolli set, Mirella Freni is even more compelling. The voice is fresher, firmer and more girlish, with more light and shade at such points as 'Un bel dì', and there's an element of vulnerability that intensifies the communication. In that, one imagines Karajan played a big part, just as he must have done in presenting Pavarotti - not quite the super-star he is today but already with a will of his own in the recording studio - as a Pinkerton of exceptional subtlety, not just a roistering cad but in his way an endearing figure in the First Act.
Significantly CD brings out the delicacy of the vocal balances in Act 1 with the voices deliberately distanced for much of the time, making such passages as 'Vienna la sera' and 'Bimba dagli occhi' the more magical in their delicacy.
Karajan, in that duet and later in the Flower duet of Act 2, draws ravishing playing from the Vienna Philharmonic strings, getting them to imitate the portamento of the singers in an echt-Viennes manner, which is ravishing to the ear. Christa Ludwig is by far the richest and most compelling of Suzukis" Gramophone