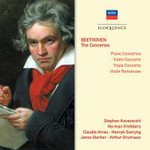 Like the Beethoven symphonies, his concertos form a cornerstone of the standard classical repertoire and collected together here, on four discs, are all his major concertos in stellar performances. From the Haydnesque first concertos, to the serene calm, poise and beauty of the Fourth Piano Concerto and the Violin Concerto, to the swagger of the Fifth ('Emperor') these are undisputed masterpieces all. The performances are all critically acclaimed - the Kovacevich/Davis partnership in the Piano Concertos, Krebbers and Haitink in the Violin Concerto and Grumiaux in the two Romances, slow movements in search of a full-length concerto, if you will, dating from c.1798-1801. By way of a curiosity is added the Piano Concerto in E flat, WoO 4, which has come down to us only in sketch form and is reconstructed by Willi Hess. Also included is Beethoven's 'tribute' to the Baroque concerto grosso in the form of his Triple Concerto, with Arrau, Szeryng and Starker as the stellar soloists.

"Krebbers gives a finely lyrical performance, yet also one with nobility, which takes its place among those by Grumiaux and Suk - and no praise could be higher than that […] Krebbers's fine performance shows great musicianship, all based on an impeccable technical skill - not a note is hesitantly placed. As both soloist and orchestra sound forward, the balance is good" (Gramophone on the Violin Concerto)

"outstanding performances … There is the absolute clarity and sparkle of his fingerwork, the magical hush of [Kovacevich's] soft playing, the captivating gradation of tone when he moves in a short phrase from brilliance to deep tenderness … Above all, the records are distinguished by the rapport between soloist and conductor. Neither is a sensation-seeking artist; both have the integrity that puts the music first, so that you can be sure you are hearing Beethoven as they feel he intended" (Gramophone on the Piano Concertos)