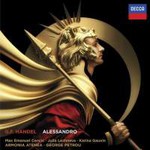 Handel's ninth major opera for London, Alessandro was written as a showcase for the "Rival Queens", the two famous Italian sopranos - Francesca Cuzzoni and Faustina Bordoni - whose supposed enmity, both personal and professional, not only generated good publicity for Handel's latest opera but also added extra dramatic frisson to the two divas' jealous clashes on stage.

Still something of a rarity even in this heyday of the Handel revival, Alessandro has only ever been recorded twice before over the past 30 years, and never previously with such a starry trio of singers in the three lead roles.

Marking the start of an exciting new partnership with the sensational Croatian counter-tenor Max Emanuel Cencic (and his company Parnassus Arts) that will involve both solo and ensemble recordings, this new recording stars Cenèiæ himself as Alexander the Great (a role originally sung by the legendary castrato Senesino), with acclaimed French Canadian soprano Karina Gauvin as the Scythian princess Lisaura, and the sensational young Russian soprano Julia Lezhneva - making her debut appearance as Decca's latest exciting solo signing - in the role of Roxana, the Persian princess who finally wins the conqueror's heart.

"These discs should come with an asbestos slipcase, so incendiary is the performance they convey...Cencic is imperious hot-bloodedness personified...perhaps best of all is Karina Gauvin's utterly disarming Lisaura, her coloratura dazzling, her bright soprano full of personality...Just as thrilling is the visceral playing...Pert and incisive, the overture crackles with energy...A revelation." (BBC Music Disc of the Month Christmas 2012)