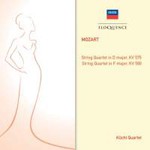 Mozart's final four quartets have a sublime quality. Two of these appear here, and the classic recording of KV575 receives its first international appearance on CD. Over the years Rainer Küchl became the VPO's first concertmaster and his quartet has evolved to a point where only he remains from the four who recorded back in 1975. These youthful performances, well recorded by Decca and quite modern in style show a full awareness of the Viennese tradition.