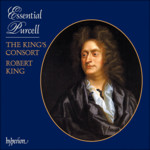 Raised amidst the veritable explosion of culture that greeted the Restoration of the British monarchy in 1660, Henry Purcell stands as a colossus in English music. Hugely prolific, he wrote with equal skill and imagination for the church, the court, the theatre, for his royal patrons and for small domestic forces: he produced over a hundred anthems, services and devotional songs of amazing originality, twenty-four magnificent Odes and Welcome Songs, an opera and four semi-operas, incidental music to over forty plays, more than a hundred secular songs and duets, over forty pieces of brilliantly inventive instrumental chamber music and more besides.
Purcell lived all his life in London; the capital was busy, dirty, crowded, unpredictable but always buzzing. As a child he lived through the plague and the Great Fire of London; tragedy struck at the age of only five when his father died. The young Purcell learned his musical craft as a boy chorister at the Chapel Royal; when his voice broke (at the unusually early age of fourteen) he was apprenticed to the keeper of the royal instruments. His extraordinary talents must have been evident, for his first official Court appointments came whilst he was still in his teens. He became organist of Westminster Abbey at the age of only nineteen and additionally became one of the organists at the Chapel Royal. He served in the colourful court of Charles II, writing and performing vast amounts for his royal employer; he also witnessed the lascivious behaviour and wanton excess that gave such excellent fodder to contemporary diarists. He watched as the far less likeable King James dug his own political grave and looked on as the Glorious Revolution brought William and Mary to the throne. And all the time he composed. As opportunities for court musicians waned, Purcell turned his attention to the world of the theatre; he was London's busiest and most sought-after composer, adored and revered by his contemporaries.

The variety, originality and sheer craftsmanship of Purcell's work is astonishing. He was a consummate setter of words under whose skill even the most hackneyed piece of English doggerel could leap into sparkling life. His writing for instruments is breathtaking. Hyperion and The King's Consort have long championed Purcell's music, recording three trail-blazing series of 'Complete Purcell'-the odes and welcome songs, the secular solo songs and the church music. Choosing music from these twenty-five albums-some thirty hours' listening-to fill just 79 minutes means that we can present twenty musical jewels of magnificent richness, but have had to leave out many more.

Purcell's wonderful, daring music stands not just amongst the greatest of the whole baroque era, but alongside that of the true geniuses of all musical history. It was not without justification that his contemporary Thomas Tudway asserted that Purcell, 'was confessedly the Greatest Genius we ever had'.

Welcome, welcome, glorious morn Z338
Fly, bold rebellion Z324
Oh, fair Cedaria, hide those eyes Z402
Hear my prayer, O Lord Z15
Dido and Aeneas Z626: When I am laid in earth 'Dido's lament' (Dido)
Let mine eyes run down with tears Z24
From hardy Climes and dangerous Toils of War Z325
If music be the food of love Z379a
Rejoice in the Lord alway 'The bell anthem' Z49
Hosanna to the highest Z187
Thou knowest, Lord, the secrets of our hearts Z58c
Fairest isle, all isles excelling (Act 5, Song of King Arthur, or The British Worthy, Z628)
Raise, raise the voice Z334
Come ye sons of Art, away Z323
She loves and she confesses too Z413
Hail! bright Cecilia Z328