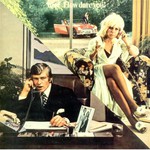 After scoring their commercial breakthrough with "I'm Not in Love" from 1975's The Original Soundtrack, 10cc continued to build on their good fortune with How Dare You. It didn't spawn another massive hit like "I'm Not in Love," but it is a well-crafted album that shows off 10cc's eccentric humor and pop smarts in equal measure. This time, the hit singles were "I'm Mandy Fly Me" and "Art for Art's Sake." The first tune is the fanciful tale of a plane crash victim saved from death by the stewardess of his dreams that plays out a poppy mock-exotica musical backdrop while the second is a tongue-in-cheek parody of commercial-minded artists set to a rocking, cowbell-driven beat. Elsewhere, How Dare You pursues a similar mix of zany humor and pop hooks: "Iceberg" brings its tale of a frigid romantic partner to life with an incredibly intricate and jazzy vocal melody, and "I Wanna Rule the World" is a witty tale of a dictator-in-training with enough catchy riffs and vocal harmonies for two or three songs. How Dare You loses a bit of steam on its second side when the songs' tempos start to slow down, but "Rock 'N' Roll Lullaby" and "Don't Hang Up" keep the listener involved through a combination of melodic songwriting and typically well-crafted arrangements. In the end, How Dare You never hits the giddy heights of The Original Soundtrack but it remains a solid album of witty pop songs that will satisfy anyone with a yen for 10cc. 4 / 5 All Music Guide.