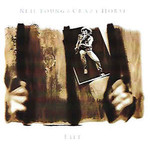 In the fall of 1978, Neil Young undertook a North American tour with Crazy Horse, then added overdubs to new songs recorded on the tour for one of his best albums, Rust Never Sleeps. In the fall 1986, he did the same thing, but Life, Young's first album with Crazy Horse since 1981's Re-ac-tor, was not one of his best albums. It was, however, better than most of the other albums he had made in the 1980s, and it was the first really interesting album he'd made in a long time. Despite the return to Crazy Horse, Young continued to use some of the production techniques from Landing on Water, especially the loud drums and the synthesizers. But he mixed things up, including acoustic-based songs such as "Long Walk Home" (which recalled "After the Gold Rush") and "Inca Queen" (the third in his series of long, atmospheric songs about the Incas) and rockers like "Prisoners of Rock 'n' Roll." The last, with its attacks on "record company clowns" and chorus "that's why we don't want to be good," seemed intended as the theme song for the Rusted-Out Garage Tour on which it was performed and served as a reminder that Young was still at odds with Geffen Records, which he left after releasing this album. Despite the criticism he had endured for his support of President Reagan's military buildup, Young had foreign policy on his mind in the action-movie-in-song "Mideast Vacation" and in "Long Walk Home," which addressed military misadventures from Vietnam to Beirut. It could be argued that Young was repeating himself on much of this material and that the album was typically uneven. But Life was an encouraging step back to the tried and true for an exploratory artist who finally seemed to have realized that he had experimented too much for his own good.