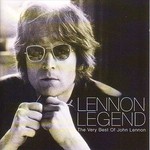 Lennon Legend was released in the fall of 1997 in England to replace the deleted John Lennon Collection, and the 20-track collection is remarkably similar to its predecessor, replicating a full 16 tracks and deleting the relatively nonessential "I'm Losing You," "Dear Yoko," and "Move Over Ms. L" in favor of "Borrowed Time," "Mother," "Nobody Told Me," and "Working Class Hero." Even if the disc isn't sequenced in strict chronological order, the end result is the strongest single-disc Lennon collection yet. It might not offer everything of worth that Lennon recorded -- the Plastic Ono Band and Imagine albums remain essentials, and there are great-to-good songs scattered among his later solo records -- but it does function as an excellent sampler and introduction to his solo career.

Imagine
Instant Karma!
Mother
Jealous Guy
Power to the People
Cold Turkey
Love
Mind Games
Whatever Gets You Thru the Night
#9 Dream
Stand by Me
(Just Like) Starting Over
Woman
Beautiful Boy (Darling Boy)
Watching the Wheels
Nobody Told Me
Borrowed Time
Working Class Hero
Happy Xmas (War Is Over)
Give Peace a Chance song