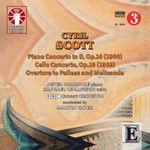 Cyril Scott's early works are preserved at the University of Melbourne, part of the collection assembled by Scott's friend Percy Grainger. From that source Martin Yates has rescued three gorgeous romantic scores: the overture Pelleas and Melisanda of 1900, perhaps written in the shadow of Tchaikovsky, the lovely Cello Concerto, Op.19 written in 1902 with its glorious D major melody, and the unfinished three-movement Piano Concerto in D, also from 1900. This is lovely music and all are worthwhile scores, but the crown of this collection is Scott's early Piano Concerto, which conductor Martin Yates has salvaged from a chaotic manuscript and for which he has provided a completion to the third movement. Played in his grandest romantic style by pianist Peter Donohoe, what is revealed is a striking romantic concerto on a big scale, and with a strong personal voice. This was a remarkable achievement for a twenty-year-old composer at the beginning of a new century. Furthermore, some of the stylistic elements that make the later First Concerto so distinctive are explored here, especially in the first two movements. World premiere recordings.