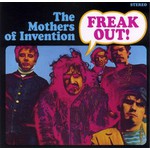 One of the most ambitious debuts in rock history, Freak Out! was a seminal concept album that somehow foreshadowed both art rock and punk at the same time. Its four LP sides deconstruct rock conventions right and left, eventually pushing into territory inspired by avant-garde classical composers. Yet the album is sequenced in an accessibly logical progression; the first half is dedicated to catchy, satirical pop/rock songs that question assumptions about pop music, setting the tone for the radical new directions of the second half. Opening with the nonconformist call to arms "Hungry Freaks, Daddy," Freak Out! quickly posits the Mothers of Invention as the antithesis of teen-idol bands, often with sneering mockeries of the teen-romance songs that had long been rock's commercial stock-in-trade. Despite his genuine emotional alienation and dissatisfaction with pop conventions, though, Frank Zappa was actually a skilled pop composer; even with the raw performances and his stinging guitar work, there's a subtle sophistication apparent in his unorthodox arrangements and tight, unpredictable melodicism. After returning to social criticism on the first song of the second half, the perceptive Watts riot protest "Trouble Every Day," Zappa exchanges pop song structure for experiments with musique concrète, amelodic dissonance, shifting time signatures, and studio effects. It's the first salvo in his career-long project of synthesizing popular and art music, high and low culture; while these pieces can meander, they virtually explode the limits of what can appear on a rock album, and effectively illustrate Freak Out!'s underlying principles: acceptance of differences and free individual expression. Zappa would spend much of his career developing and exploring ideas -- both musical and conceptual -- first put forth here; while his myriad directions often produced more sophisticated work, Freak Out! contains at least the rudiments of almost everything that followed, and few of Zappa's records can match its excitement over its own sense of possibility. 5 / 5 All Music Guide

A1 Hungry Freaks, Daddy
A2 I Ain't Got No Heart
A3 Who Are The Brain Police?
A4 Go Cry On Somebody Else's Shoulder
A5 Motherly Love
A6 How Could I Be Such A Fool
B1 Wowie Zowie
B2 You Didn't Try To Call Me
B3 Any Way The Wind Blows
B4 I'm Not Satisfied
B5 You're Probably Wondering Why I'm Here
C1 Trouble Every Day 6:16