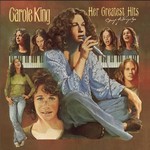 Carole King
Her Greatest Hits: Songs Of Long Ago (LP)

Her Greatest Hits: Songs of Long Ago is the first official compilation album by Carole King. It was released in 1978 and features twelve songs that had previously appeared on her six studio albums released between 1971 and 1976.

This certified platinum compilation features twelve songs which had previously appeared on her studio albums Tapestry, Music, Rhymes and Reasons, Fantasy, Wrap Around Joy and Thoroughbred. Four of the songs had appeared on her second album Tapestry, one of the most successful albums in the history of popular music. "Brother, Brother", a song of her third album Music, is the only one chosen for the compilation LP that was never released as a single.