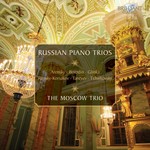 This 3‐disc collection showcases Russian piano trios from the mid‐nineteenth to early‐twentieth centuries. Piano trios were unheard of for Russian composers until Mikhail Glinka wrote one in 1832; it earned the epithet 'Pathétique' as it seemed to be a reflection of Glinka's general sadness at the time of writing, the piece alternating between caustic tension and attempts at light‐hearted optimism.

A mournful, melancholic influence then became characteristic of the Russian piano trio: Tchaikovsky unknowingly created a tradition when he composed his offering in 1882 - one of his greatest chamber works and which he dedicated to his recently deceased and much‐missed friend Nikolay Rubinstein. On several subsequent occasions, piano trios were written as memorials. The collection also includes the mathematically‐governed trio of Sergey Taneyev, who had gained a reputation as a cerebral composer, and the trio of Rimsky‐ Korsakov, whose mastery of opera and vocal writing can be seen in the final movement as each instrument takes on its own 'voice' and emotion - thus resembling an interaction between characters. Alexander Borodin used the Classical model for his trio, although it contains surprising chromaticism as well as dramatic changes of temperament, including the tragic hymn in the second movement. Anton Arensky's take on the genre completes the collection. The Moscow Piano Trio was formed in 1976 and has achieved huge success in international competitions, notably winning the Maurice Ravel Gold Medal at the Bordeaux 'Mai Musical'. The trio is comprised of pianist Alexander Bonduriansky, violinist Vladimir Ivanov and cellist Mikhail Utkin.

Tchaikovsky: Piano Trio in A minor, Op. 50 'In Memory of a Great Artist'