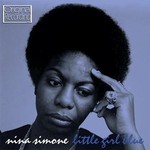 When Nina Simone went into the studio in December 1957 to record what would become her debut album, she still had aspirations of becoming a classical concert pianist. The sound she came up with on Little Girl Blue could not have been further from that style! I Love You Porgy, from the opera Porgy & Bess, would become something of a signature tune in the US as it became her only Top 40 hit. Here in the UK, it was My Baby Just Cares For Me, recorded as something of an afterthought as the record company wanted an up-tempo number, that would make her name, although it was not until the track was reissued in 1987 that it became a major hit. Whilst history has made this something of an important album for Nina, at the time it failed dismally, with Nina feeling that the record label (Bethlehem) did little or nothing to promote it.