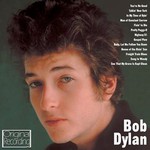 John Hammond first met Bob Dylan at a rehearsal session for Carolyn Hester (Dylan was to be the session harmonica player) in September 1961 and was suitably impressed enough to offer him a standard five year contract barely two weeks later. What would be Bob Dylan's first album in the deal was recorded in November in three short afternoon sessions, with a total of seventeen songs being recorded. During the course of the sessions Dylan refused to do second takes, so while that gives the resulting tracks a degree of spontaneity, it also meant that every error was left in place. The album was released in March 1962 (the original cover featured a reversed picture of Dylan holding a guitar, but there is no adequate explanation for why the picture was reversed) but didn't make much of an impression; with US sales of just 2,500 copies it remains his only album not to chart. In the UK it failed to chart first time around but subsequently reached #13 in 1965.