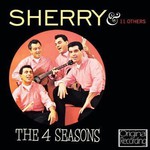 The Four Seasons
Sherry & 11 Others

Originally formed as The Four Lovers, they became the 4 Seasons in 1960, built around Frankie Valli on lead vocals, Bob Gaudio on keyboards and tenor vocals, Tommy DeVito on lead guitar and baritone vocals and Nick Massi on bass guitar and bass vocals. Unlike many other groups of the time, they wrote much of their own material, including the two major hits to be found on this album, Big Girls Don't Cry and the number one smash Sherry (which was originally written as a tribute to the then First Lady Jackie Kennedy and was originally titled Jackie Baby). Whilst many albums of the time invariably contained one or two hit singles and were padded out with fodder for the rest of the tracks (which might well have influenced the title of this album), Sherry & 11 Others is something of a difference, since it allows the group's signature sound room to shine. It worked too, for the album would become a Top Ten success in the US, peaking at #6 on the Billboard chart.