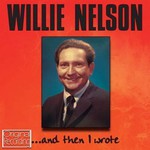 Willie Nelson
And Then I Wrote

It would not be until the 1970s that the musical world came to fully appreciate Willie Nelson. As a songwriter his talent had been obvious from the very start of his career at the tail end of the 1950s, with his compositions Hello Walls, Funny How Time Slips Away and Crazy becoming hits for Faron Young, Billy Walker and Patsy Cline respectively. All three tracks appeared on Willie's debut album released in 1962, but despite a number of minor hits over the next couple of years, it would take a full decade before he achieved any lasting and meaningful success. Which is a pity, since on the evidence of And Then I Wrote he deserved to make that breakthrough long before. An accomplished writer, his unique vocal style lends extra weight to the songs.