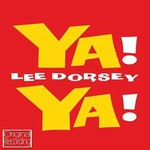 Lee Dorsey
Ya! Ya!

Inspired by a children's nursery rhyme, Ya Ya proved to be New Orleans R&B singer Lee Dorsey's breakthrough hit, peaking at #7 on the pop chart and topping the R&B listings. Lee followed that single with an album of the same name, recorded for Bobby Robinson's Fury label, with the album also giving rise to the minor hit single Do-Re-Mi. Although the album sold well it failed to chart and after the promotional effort was spent, Lee returned to his day job running a car repair and panel beating business. He would return later in the decade with another string of hits, this time able to sustain that success, but he always eventually returned to his car repair business!