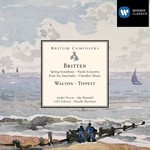 "The Britten-Walton-Tippett set is an exemplar of the excellence found in the EMI house tradition. There are whoopingly good recordings of the Spring Symphony and the Four Sea Interludes - sadly the Grimes - Passacaglia is not included. What a stunning team Previn and the LSO made! If you doubt it just listen to the Storm Interlude and the syncopated birdsong in the now rarely heard Symphony. The violin concertos by Britten and Walton are played by Ida Haendel with typically sweetly penetrating tone placed amid the seething, dramatic and emollient orchestral canvas articulated by Berglund and the Bournemouth Symphony. What a great player Haendel is. Her reading of the Walton has been part of the backdrop to my life along with the more ferociously ardent Heifetz (with the composer) and, from left-field, the glorious Francescatti (Sony). The two concertos set each other off very nicely with the Walton being the more succulently romantic of the two and the Britten itself being at the romantic end of Britten's own spectrum.

After lushly seductive orchestral pastures we turn for catharsis to the assertively recorded and performed CD 3. Britten is pleased to oblige via the statuesque gestures and wit of the Suite for violin and piano. Britten relaxes a little for the glittering final movement. The earnest little Elegy (1930) is in the hands of Paul Silverthorne and his viola. Moray Welsh in this recording shows himself a most masterly cellist. Such a pity that his 1979 broadcast of the Foulds Cello Sonata with Ronald Stevenson appears not to be available to issue. His stirring and atmospheric Britten Cello Sonata with John Lenehan is superb. Roy Carter leads the listener through the plaintive fields that are the Six Metamorphoses; one senses that he is a supplicant for our attention rather than shouting that we must. The result is that we want to attend to this reed singer.

After Britten the chamber music composer we now encounter Walton in the same genre. The Piano Quartet (1921) is redolent of Howells' example. The two would play well in the same programme. It's not typical mature Walton but fascinating anyway. Will we ever hear his contemporaneous overture Doctor Syntax, I wonder? Next comes the Violin Sonata (1947-49) - which is mature Walton. It will be recalled that Christopher Palmer orchestrated the work to make of it a companion to the Violin Concerto. However it is a strong work in its own right and emerges so in the hands of Janice Graham and John Alley who also played the Britten Suite on CD 3. This time all the Walton hallmarks are glowingly present. The warmly Mediterranean Five Bagatelles are most adeptly played by Tom Kerstens. Glorious full DDD sound enhances the seductive effect. These five pieces were orchestrated as the Varii Capricci and should be heard more often in that format.

The last disc in the set is given over to Marriner's Tippett in vivid 1995 recordings. The Divertimento skips, chirrups and rollocks along in the sort of argot reserved by British composers for such English folksong jollies. There's Britten's A Time There Was, Moeran's Serenade and RVW's Folksong Suite. It's all very pleasing. When we eventually get to hear Tippett's folk-opera Robin Hood it will presumably sound similar. By contrast the pleasant Little Music for Strings while strongly put across is rather cool and monochrome. The Sonata for Four Horns is stirringly and poetically advocated by the Michael Thompson Horn Quartet. That said I though the textures more successfully resolved in the hands of the Universal competition from the mid- 1960s: The disc ends very well indeed with the Concerto for Double String Orchestra. It's a work in the bloodstream of Marriner and the Academy." MuiscWeb