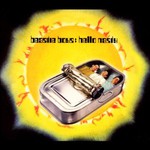 Hello Nasty, the Beastie Boys' fifth album, is a head-spinning listen loaded with analog synthesizers, old drum machines, call-and-response vocals, freestyle rhyming, futuristic sound effects, and virtuoso turntable scratching. The Beasties have long been notorious for their dense, multi-layered explosions, but Hello Nasty is their first record to build on the multi-ethnic junk culture breakthrough of Check Your Head, instead of merely replicating it. Moving from electro-funk breakdowns to Latin-soul jams to spacy pop, Hello Nasty covers as much ground as Check Your Head or Ill Communication, but the flow is natural, like Paul's Boutique, even if the finish is retro-stylized. Hiring DJ Mixmaster Mike (one of the Invisibl Skratch Piklz) turned out to be a masterstroke; he and the Beasties created a sound that strongly recalls the spare electronic funk of the early '80s, but spiked with the samples and post-modern absurdist wit that have become their trademarks. On the surface, the sonic collages of Hello Nasty don't appear as dense as Paul's Boutique, nor is there a single as grabbing as "Sabotage," but given time, little details emerge, and each song forms its own identity. A few stray from the course, and the ending is a little anticlimactic, but that doesn't erase the riches of Hello Nasty -- the old-school kick of "Super Disco Breakin'" and "The Move"; Adam Yauch's crooning on "I Don't Know"; Lee "Scratch" Perry's cameo; and the recurring video game samples, to name just a few. The sonic adventures alone make the album noteworthy, but what makes it remarkable is how it looks to the future by looking to the past. There's no question that Hello Nasty is saturated in old-school sounds and styles, but by reviving the future-shock rock of the early '80s, the Beasties have shrewdly set themselves up for the new millennium.