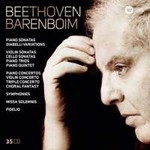 "By all accounts Beethoven was a freethinking person, and a courageous one, and I find courage an essential quality for the understanding, let alone the performance, of his works." Daniel Barenboim

No other recording artist could rival Daniel Barenboim's scope in the music of Beethoven. This 35-CD set unites recordings made by Barenboim - as a pianist and as conductor - over a period of more than 30 years (1966-1999). The selection, comprising both studio and live recordings, has been made from the unparalleled Warner Classics catalogue and includes such landmarks as the complete piano sonatas (recorded in the 1960s), the complete symphonies, the five piano concertos (recorded in the 1980s in Berlin with Barenboim conducting from the piano), the violin concerto, Fidelio, and the Missa Solemnis.

For many music-lovers, Beethoven is the greatest composer of them all: his music, groundbreaking in so many respects, represents the striving and triumph of the human spirit and the aspiration to freedom. Barenboim sums up his ideology of performing Beethoven thus: "By all accounts he was a freethinking person, and a courageous one, and I find courage an essential quality for the understanding, let alone the performance, of his works ... Beethoven asks the performer to show courage, not to be afraid of going to the edge of the precipice, and he thus forces the performer to find the 'line of most resistance', a phrase coined by the great pianist Artur Schnabel."

Barenboim (b.1942 in Buenos Aires) has been one of the world's most celebrated classical musicians for more than 50 years. When, at the age of 11, he played for Wilhelm Furtwängler, the great conductor (famed, of course, for his Beethoven) described the young pianist as "a phenomenon". It was as a pianist that Barenboim first achieved fame, but he has established himself as one of the world's great conductors and as one of the most influential figures in the field of classical music. He is currently music director of the Berliner Staatsoper and conductor for life of the Berliner Staatskapelle, while his past posts include the role of music director of the Chicago Symphony Orchestra and La Scala, Milan.

He is also a public figure whose fame extends beyond the world of music. Fortune Magazine recently named him one of the World's 50 Greatest Leaders, in particular for his work as founder and conductor of the West-Eastern Divan Orchestra, which brings together young Israeli and Arab musicians. Barenboim says that: "Great music is the result of concentrated listening - every musician listening intently to the voice of the composer and to each other. Harmony in personal or international relations can also only exist by listening, each party opening its ears to the other's narrative or point of view … People who listen to each other, both musically and in all other ways, can achieve greater things." No doubt Beethoven would have agreed wholeheartedly with those sentiments.

Quintet in E flat major for piano and winds, Op.16

The Best of Gershwin