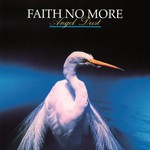 In an era when numerous Funk Metal acts ruled the airwaves, one of the genre's forefathers Faith No More proved to be the undisputed masters of inventive songwriting with their album Angel Dust (1992). After gaining mainstream success with their previous album The Real Thing (off the back of global hit "Epic") in 1989, the band continued three years later with Angel Dust, a mind-bending masterpiece of musicianship.

Side B
1. Smaller And Smaller
2. Everything's Ruined
3. Malpractice
4. Kindergarten

Side C
1. Be Aggressive
2. A Small Victory
3. Crack Hitler