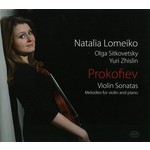 Hailed by Lord Menuhin as "one of the most brilliant of our younger violinists", Natalia Lomeiko has established herself as an internationally renowned violinist and as Professor at the Royal College of Music in London.

"Half of the pieces on this album were written aboard; the earliest of them, the Five Melodies, originally for voice and piano, was written in the USA, and the Sonata for Two Violins in France. Having performed the Double Sonata a lot with my husband Yuri Zhislin this is a long-anticipated opportunity to share our insight into this piece. From picturesque and lyrical slow movements to the folk inspired last movement the writing for the violins is brilliant, both parts interwoven so that it's often hard to tell which violin is playing." - Natalia Lomeiko 2013