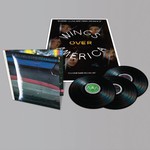 Wings over America is the monumental live album by Paul McCartney and Wings, originally released in December of 1976. Recorded throughout the band?s "Wings over America" U.S. tour dates earlier that Spring, the album reached #1 in the US in early 1977.

Now Paul gives fans the chance to be able to immerse themselves in a concert that is destined to live forever.