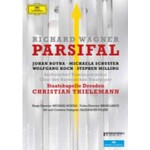 Christian Thielemann launches a new era for the Salzburg Easter Festival, with a groundbreaking performance of Wagner's 'Easter opera'.

Earlier in Wagner bicentenary year, Christian Thielemann put his stamp on the Salzburg Easter Festival with a triumphant Parsifal. In his first year as Artistic Director he has launched a new era, with a performance on the one hand firmly rooted in tradition, whilst pushing visual and artistic boundaries along the way.

The evening marked something of a homecoming for the acclaimed Wagnerian, who worked on the opera in Salzburg with his mentor Herbert von Karajan in the Eighties. Hailing a new tradition, the performance was greeted with tumultuous applause from the Festival audience and hailed by international critics.

The cast of leading Wagnerians includes the great heldentenor Johan Botha in the title role, Michaela Schuster as the enigmatic Kundry, Danish bass Stephen Milling as Gurnemanz and, in another break with tradition, Wolfgang Koch in the two baritone roles of Amfortas and Klingsor.

Unlike the deep pit of Bayreuth, where the opera was first performed, the orchestra in the Große Festspielhaus is placed on a raised platform, bringing it closer to the heart of the drama and revealing the full precision and refinement of Dresden's great opera orchestra.

"The singing cast are very fine and, like his players, seem to have studied with their conductor in Goodall-like detail. Botha certainly provides fine singing in the title-role...Another highlight is the near-deranged agony of Amfortas (Wolfgang Koch)...Both Grail scenes are fully staged, rather than just stood and sung and are almost unbearably moving" (Gramophone)