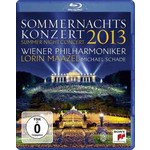 The Summer Night Concert of the Vienna Philharmonic is an annual open-air event that takes place in the park of Schönbrunn Palace in Vienna with the palace as a magnificent backdrop. Everyone is invited to come to this unique occasion - with free admission. Each year up to 100,000 people take up the invitation. The concert is also broadcast on TV and radio in more than 60 countries, and thus reaches an audience of millions.

In 2013 Lorin Maazel conducted the Summer Night Concert for the first time; Swiss tenor Michael Schade joins the orchestra as guest-soloist. With this year's program the orchestra celebrates Wagner and Verdi in honor of their anniversaries.

Since 2008 the Vienna Philharmonic has provided an outstanding experience for the people of Vienna and guests to their city with this free concert in the park of Schönbrunn Palace. The palace and its Baroque park, which have UNESCO World Heritage status, are an extraordinary setting for this musical gift.

In the recent years the orchestra has been conducted by Gustavo Dudamel, Valery Gergiev, Franz Welser-Möst, Daniel Barenboim and Georges Prêtre. For over five decades, Lorin Maazel has been one of the world's most esteemed and sought-after conductors.

This year the concert took place on May 30th.