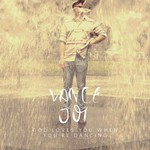 Vance Joy
God Loves You When You're Dancing

Vance Joy's debut EP God Loves You When You're Dancing worms its way under your skin. It's not an easy task to produce a record so evocative, yet so stripped-back; simplicity in art is often a challenging feat. For Melbourne-based singer and songwriter Vance Joy, the songs began as a collection of loose threads, which over time naturally weaved together, like they were always meant to find a life of their own.

Like the unforced orchestration of his songs, Vance Joy's recent success developed organically. Earning his chops on Melbourne's open mic circuit, he tested out new material at venues like the iconic Great Britain Hotel in Richmond. Naturally, his music attracted fans, press and label interest. Before long, the musician played sold-out shows at The Worker's Club and The Toff in Town in Melbourne, and penned a deal with Liberation Music. He's since hit the national touring circuit, with support slots for Of Monsters and Men and Julia Stone already this year. In March, Vance Joy embarked on his first international appearance at SXSW.

The production process for God Loves You When You're Dancing was any artist's dream. For just one week Vance Joy holed up with producer John Castle (Lior, The Drones) in The Shed Studios with Ed White on percussion and cello. "It was spontaneous," Vance Joy says. "John's style is very instinctive, and that felt really good for me. I'd have an idea, and he'd just say 'let's do it'. For us, the whole process felt right."